How to Play Boarding Action – The BEST way to play 40K?! 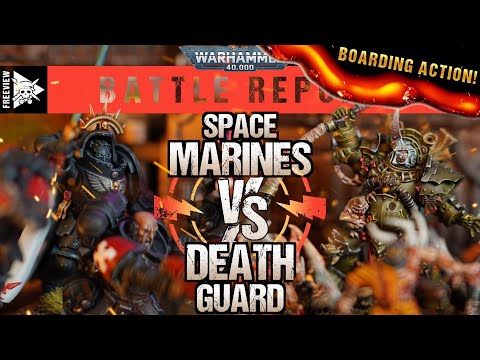 Boarding Action is here and we’re so excited to be releasing this game for you bosses today!!  Lawrence leads the Obsidian Dragons to battle, breaching the hull of a Void Craft to purge the zombies within, but Beard and the Death Guard will stand in his way with Grandfather’s blessings!

We hope you like this new show!  Boarding Action offers a unique way to play with much shorter games, all new missions and a balanced rule set…and even better is that you only need 500 points to play.  Use your favourite units or use this as an opportunity to build up a new faction!

**ATTENTION – This Report was filmed before the Mustering Rules, Balance Dataslate and Munitorum Field Manual PDFs were released**

🏆 Make sure to follow along with the League Rankings at  ➡️ https://tabletoptactics.tv/league-rankings/

(Spoiler Warning! The Rankings are updated with every release so don’t read it until you’ve watched the game!)

📖 Learn the ways of war with our in depth Tactical Guides!

🛒 For all your hobby and gaming needs, visit Tabletop Tactics’ sponsors Element Games

Loved the game fellas! I started back in 3rd edition, fell away for a bit and returned recently, so this was very nostalgic, but also true to the warhammer that I fell in love with (and love a little more tbh haha) 😊

Spending a CP and stylishly passing the last, just to assert his dominance.

I know he’s playing DG, but that was gross.

Great content as always, big up TT. I get to play my first BA game on Tuesday. Question for the rules master (chef) I wanted to run Eisenhorn with some cadian shock troops, some crusaders and a priest. Haven’t used crusaders in ages, are they obsolete now for the gaurd?

And can I run Eisenhorn with Astra in Boarding Actions?

Cheers and thanks again for all the great videos

Loved this one! You guys are so entertaining to watch, huge <expletive> eating grin on my face while you guys were swinging around chain swords and daemon flails! Keep it up!

This was really great! I heard the heavy footsteps and bolter shots from the Astartes series in the back of my mind as I watched the batrep. Really looking towards more and it’s great to see the Obsidian Dragons back in action!

Really interested in BA, quickfire games, great for introducing to the hobby as opposed to Kill Team which is bit more unique and different with its ruleset, imagine if KT had been more like BA people! Also, slight niggle, Putrescent Vitality gives +1S and +1T its value isnt different whether over or under, might be confusing with Gift of Contagion which reduces S & A depending on value.

I mean, how freaking good does this look!! Amazing report guys, does anyone know how the rules would impact deathwatch kill teams? Like I’m guessing that despite bikes getting the troops key word when in a kill team, they couldn’t be run!

Holly smokes it does look good doesn’t it and I was looking for an excuse to build a 500 point Charcharodon SM force.

Would definitely want to see more of this! Can’t wait to see what else you release for this.

Would love to see more Boarding actions on the channel. Really fun to watch!

Haha, Loved it. Top battle & jokes, & I’d deffo like to see more of these bat reps! Looking forward to playing some games in this format too. Looks quality!

Great battle and top banter, not sure this game is for me, seems a little restricted but can see the appeal 👍

Fantastic batrep! Has the reroll 1s to wound for plague weapons gone now or just in boarding actions?

I was quite enthusiastic about Boarding Action, and it looks fun and interesting. Unfortunately, it seems you need the dedicated terrain, or at least the one I own (and it’s a lot) doesn’t seem to work… and the cost of 170 euros just for it is too high. A real shame!

Could be a new favorite medium of 40k 💪

I just had an epiphany: I personally think the auras being affected by terrain should be implemented in 10th as well as the LOS rules in general. May this be POC on a big scale?

This was amazing!! More of this!!

I think Boarding Action is my new favourite, nice and compact and a little simpler. Excellent work guys, the character fight was epic!

PLEASE play more of these. The fast pace and the small board format are fantastic. I was on the fence about buying this set, but now I’m all in.

So nice! Make more boarding action for sure!

Thanks to this I’ve just bought a bunch of Salamanders. Great game. Looks really fun!

I said this on a yt post but here again. This was an amazing batrep and so much fun to watch. You all always bring such amazing energy to the table, but in this batrep it seems that the hype becomes infectious (as I’m sure typhus would agree).

Thanks chaps, enjoyed that! Any chance of Blood Angels (perhaps with some Terminators) vs Tyranids (perhaps some sort of… genestealer-heavy build?) at some point on the channel? Space Hulk was my favourite game as a kid and I’d love to see it brought back to life in Boarding Action form.

I loved everything about this! The board size, the unit comps, the excitement from the players, the seriously cool camera angles and effects. Just talked to my buddies and this game mode is definitely something we are going to work in to our weekly rotation once we get the rules. Great job Spider and Beard, and great camera work Chef!

@The Chef
First, don’t apologize! Your content is awesome and I’m glad I can support it.
Second, regarding the CAPS thing: for your branding, titles and credits, I totally understand the consistency. And please don’t change it! CAPS are impactful and you need to be. But for notes, it’s sometimes hard to read… Most people don’t care I guess because they dont read 😅. Or it’s just me 🤔

I’ll put a vote in for more boarding actions, it looks real fun!

Game looks fun, but I need to know: why do you not tell us the whole rule set and tell us to look at the actual rule book? You explain Tempest games in their entirety, but never regular Nephilhim matches. The only reason I ask now is because the boarding action book is on preorder, so I can reference it. Thanks, it was a great game.

This was awesome. Can’t wait for more.

Brilliant! Loved it. End credit bloopers are ace too.

This was so great. Engaging, fast and thematic. Really well executed everyone can’t wait to see more!

How wonderful! I’d love to see more of this, maybe with Tyranids or GSC! 😜

What a cool game! I agree with the others… MORE Boarding Action please 😀 !

But a bit of advice though regarding the montage : characters in CAPS (UPPERCASE if you prefer) are really hard to read due to the brain ability to recognize word by the way they’re shaped. So it would be awesome for us viewers if you could change the way you type in, and USE ONLY UPPERCASE TO PUT EMPHASIS INTO THE TEXT AND NOT IN GENERAL. PLUS ITS SEEMS LIKE IM SCREAMING AND IM NOT 🙂

Thanks guys, love U !

So if you could draw LOS between the Intercessors to the Captain, you could charge, as long as you rolled high enough to path around him?

Does Lawrence have to spend an action on Secure Site? Don’t all SM make objectives sticky now?

The way GW could really make this game pop is by forgetting about abstract objective markers and kill tallies and have actual Missions, like reach the bridge in 5 rounds, or hold off the hordes of Chaos cultists as the Techmarine rigs the reactor to blow, etc. this game is practically made for Deathwatch and Custodes scenarios.

Looks like the old zone mortalis which was awesome

Yes please! More of this!

I really enjoyed this and would love to see more if it.

What a fun game mode! I want to thank Table Top Tactics for helping me get into 40K – your enthusiasm, the joy you have for playing, and how you explain the strategy has been a massive influence on getting me to play. Now I have a full army of templars and I have embarked on my eternal crusade! Glory to the Emperor! Death to the Heretic!

I must say, truly incredible battle report. I haven’t been this hyped watching an hour of 40K in a long time and that’s including the battle reports across other channels. Truly experts at your craft, delivering an unbelievably fun narrative and execution. I’m here for every future boarding action video and I hope it becomes a staple in your rotation!!! More please!!!

Really been looking forward to this! Great stuff guys!

How to Play Boarding Action – The BEST way to play 40K?!